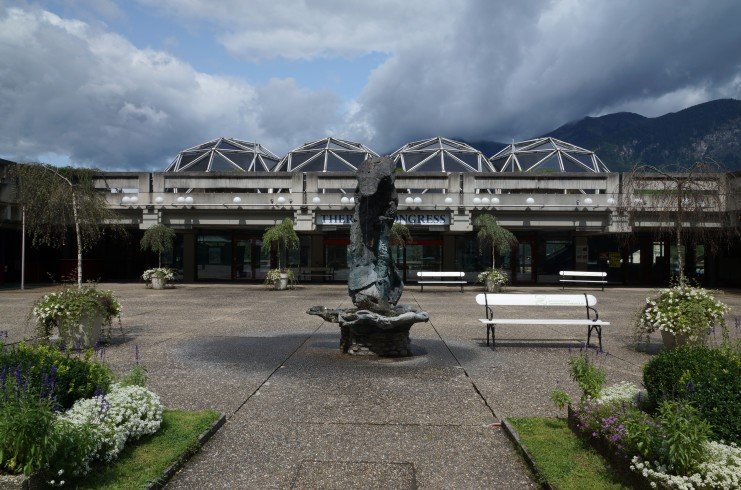 In our blog we have often talked about how some places, some buildings, in concrete have a particular charm given by the shape and location. The Kongreßhaus (Congress Center) in Bad Gastein is certainly one of those extremely suggestive places where the conformation of the territory and architecture are perfectly able to merge, creating a breathtaking setting.

With alpine peaks that rise beyond the three-thousand-meter mark, all the way up into the glacial zones of the Hohe Tauern range, Bad Gastein isn’t just the Monte Carlo of the Alps, it is also a paradise for fans of outdoor sports. In such a popular place, therefore, an important meeting place could not be missing, which would also have an equally important cultural place for the town. Designed by Gerhard Garstenauer, the Kongreßhaus presents itself with a green roof that is, at the same time, a public square and an entrance to the building, with a program that is housed on the floors beneath, generating a series of large stacked terraces that extend above a steep drop and open out towards the landscape.

The building’s unusual arrangement places its design on the scale of infrastructure, with enormous concrete pillars and a Brutalist style that contrasts with the delicate 19th-century structures that surround it.

On the entrance level, four geodesic structures, which house a cafeteria and support services for the public space, are the only elements of the building visible from Bad Gastein, since the rest of the volume can only be seen from far-off places lower down in the valley. In 2007, the facility was closed.

In 2013, it was bought by an investor and, since then, access to the public spaces of the upper terraces has once again been allowed. There is a plan for the building to house a cable car station in the future. The building received an award from the Austrian builders’ guild in 1973.

Since 1999, the architectural historian and publicist Norbert Mayr had requested a listing for heritage value for this building. In DOCOMOMO’s description is reported: “The congress center can be described as a major work of brutalism in Austria and is certainly unique in the Alps in its structural and formal execution; for which he received the architecture prize of the State of Salzburg in 1975 for the exemplary integration of the spa and congress center into the urban structure and the solution to the extreme building site situation.“

At present the building, thanks to its construction in precast concrete, has no structural failure and its state of conservation can be said to be good. In any case it would be good to be able to find a use and a location for this building which has represented an important piece of the history of the Austrian region and which can still give a lot to the community that lives around it.

The post Fairytale scenery: the Kongreßhaus in Bad Gastein appeared first on InnovaConcrete.