Problems you can solve with Cor-Tuf Ultra-High-Performance Concrete

In one example reaction, moisture and/or salt ions penetrate the porous channels present in all traditional concrete and begin to oxidize the steel reinforcement embedded within it. Over time, the oxidizing steel swells and as it increases in size, the bond with the concrete surrounding it weakens. Once the concrete to steel bond becomes fully negated, the concrete will crack and become extremely brittle. In time this brittle concrete will fall away from the compromised area, exposing the oxidized rebar within.

In another similar reaction, moisture and other chemicals once again penetrate the old style of concrete and react with certain aggregate materials used to construct the concrete. This reaction also destroys the necessary bond between the traditional concrete matrix and the surface of the aggregate, wreaking the structure and creating pressure within the structure, causing cracks, spalling, and significant overall weakness.

Concrete spalling is a terrible problem that has plagued contractors for years, affecting a variety of structures, including buildings, bridges, car parks, tanks, dams, and waterfront structures such as sea walls, docks, and jetties. The pieces of concrete that fall away can injure people and physical objects below. If the failing concrete is not repaired, an entire structure can fail.

The biggest problem with today’s traditional, reinforced concrete, still produced using methods patented about 150 years ago, is that it is porous. It absorbs water and chemicals like a sponge, which then rusts the internal reinforcing steel rods, which then causes creeping failure from within. By the time we can see outward signs of decay, it’s already become dangerous.

Eliminate the porous nature of concrete, and these concrete construction problems go away.

Cor-Tuf UHPC is a non-porous concrete. It is impervious to water and chemicals. It can be used to repair traditional, failing concrete, and to build structures that significantly outlast traditional concrete. It is composed of an optimized gradation of granular constituents, cementitious materials, and reinforcing fibers with a water-to-cementitious materials ratio of less than 0.25.

The tragic failing of buildings in Miami recently, as well as the pedestrian bridge that collapsed in Washington, DC and the closure of the I-40 Mississippi River bridge are recent examples of what happens when concrete structures fail.

Cor-Tuf UHPC can be used to repair these structures, making them even stronger than they were originally.

The process for repairing failing concrete components is fairly straightforward and can be broken down into three primary steps: cleaning, forming and pouring.

First, the bulk of the damaged concrete needs to be removed as well as dust and dirt on the surface. Sometimes a bonding agent is applied after the cleaning has been completed. However, this step isn’t necessary when using CT25, which only requires that the clean surface be moistened.

Once cleaning and pre-wetting is complete, the area will have a supported form built around it. Each situation will be unique, based on the factors that make up the context of the repair.

After the area is formed, CT25 can be poured into the top of it. Typically, the form will remain in place for a day or so, again depending on specific contextual factors of the repair. Once the forms are removed the material will continue to cure for the next 28 – 56 days.

No other preparation is necessary, and no additional adhesives are required. Cor-Tuf UHPC can then be applied to the indentations. It will bond to the surface. The new, replacement concrete is stronger than even non-spalled standard concrete.

The inherent properties of traditional concrete result in the need for constant and costly maintenance. The Whaley Bridge dam is an example of a concrete structure that failed largely due to the inability of traditional concrete to fulfill the structure’s function. A dam is meant to withstand tremendous pressure and force, but is unable to do so when it contains cracks or holes that will only expand over time. The force of the water over the cracked spillway ultimately caused its collapse.

Panels for tilt-ups and other pre-cast applications typically require pre-stressed or pre-tensile concrete. The internal rebar and steel cable strands are stretched to approximately three-quarters of their strength prior to the cement being poured into the forms. Once the concrete is cured, the tensioning is released, transferring the tensile strength to the concrete.

For bridges, once the bridge deck joints have been installed with UHPC, the entire deck should be flooded with one-inch depth of water for a minimum of 30 minutes. Inspect the concrete surfaces under the joint for a minimum of 45 minutes after the supply of water has stopped, to ensure there is no evidence of dripping water or moisture. Locate and seal any leaks and take remedial measures necessary to stop further leakage, and conduct additional water integrity tests.

With Cor-Tuf UHPC, rebar and steel cables are not required for most applications; there are only a few where rebar is advisable, such as the end caps of a piling. But as a general rule, this step can be eliminated.

The Florida Department of Transportation (DOT) conducted tests to measure movement of a pre-tensioned cable inside a square piling made with Cor-Tuf UHPC CT25. The concrete gripped the pretensioned cable inside our first square piling so completely that the Florida DOT was unable to detect any movement of significance when the cable was de-tensioned. That phenomenon simply does not happen normally.

Bridges and buildings already constructed with concrete panels can be strengthened significantly by fusing them together by using Cor-Tuf UHPC as the adhesive between the panels.

It can be used to create cast-in-place joints between precast beams, build pre-and post-tensioning components, link slabs between adjacent spans, and for tilt-up construction.

As you can see in the picture below, when used to link the panels of traditional concrete slabs on a bridge, the slabs have rebar ends protruding out of the panels, forming an alternating pattern. There is also a central rib that goes down the center of the joint area. CT25 is poured into the gap. Forms are not removed until Cor-Tuf UHPC achieves a minimum compressive strength of 10,000 psi.

Because of its unusually strong pre-tensile strength, it has the ability to adhere to the rebar ends, and not let them go. It permanently fuses the sections together. The combination of the materials in the cementitious matrix with the embedded steel fibers allows there to be flexure in the joint without any cracking. It’s not brittle, as traditional concrete would be. The flexing properties accommodate the heaving that typically takes place in suspended bridge deck panels, for example, and helps the structure adjust to high-weight and high-wind situations.

In these applications, the joint is stronger than either panel that it is joining together. 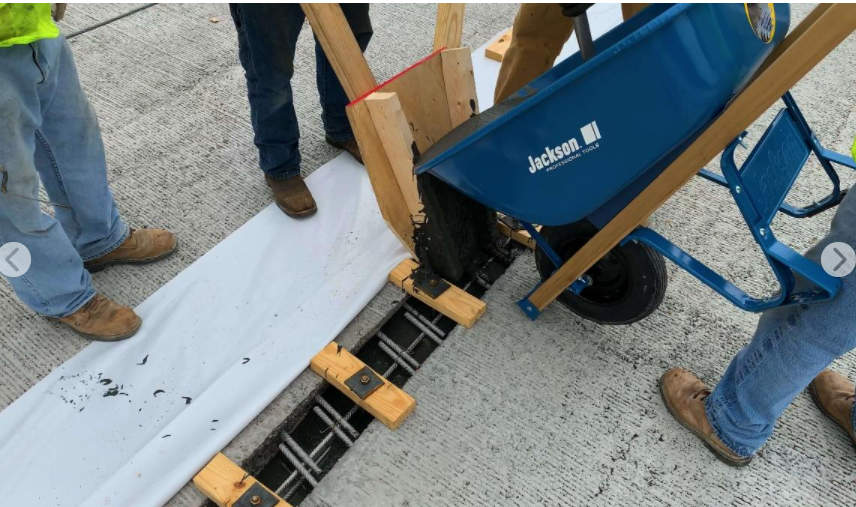 Preserving structures such as concrete bridge decks has traditionally been accomplished using polymer, asphalt, or low-permeability concrete. However, UHPC offers another option, able to serve as a concrete sealer.

From an environmental and sustainability standpoint, concrete resurfacing on existing structures is much less stressful on the environment and consumes less material. The steel fibers, which eliminate the need for steel rebar in most cases, are mixed into the Cor-Tuf mixture and measure .008 inches in diameter by .5 inches long.

Cor-Tuf UHPC can resist abrasion, freeze-thaw cycles, and penetration of chlorides and sulphides, providing a robust wear surface overlay. It also cures quickly, and at full strength, is 10 times the compressive strength of traditional concrete. It lasts more than 100 years, versus 15 – 25 years for standard concrete.

Using all the usual concrete processing methods and tools

Cor-Tuf UHPC CT25 should be stored in a dry environment, optimally between 40 to 100 degrees, up to six months in the original unopened packaging.

Cor-Tuf Ultra High Performance Concrete contains 80% of the same material found in the beams, pillars, foundations, and slabs that have been failing. The remaining 20% of what constitutes UHPC is made up of nanomaterials that are so small that they fill in and effectively eliminate any holes that exist within concrete. This is why Cor-Tuf UHPC is an impermeable concrete that withstands the elements.

Unlike all other UHPC products before it, Cor-Tuf UHPC is easily assimilated into all of the processes, methods, and equipment used to mix, batch, place, and cure traditional concrete. The mix can be used for the highest-yield industrial applications all the way down to single-yard solutions. High-shear mixers are recommended to properly batch CT25. Batching should be done in accordance with Cor-Tuf’s published QC and batching protocols. Cor-Tuf provides training for construction workers.

Moisture management is a key factor, based on values measured at the time of mixing. Cor-Tuf UHPC can be successfully poured using a variety of industry-standard means and methods, including ready-mix concrete trucks, Tuckerbilt dispensers, skid-steer auger buckets, and any type of wheelbarrow, bucket, or buggy. It can also be dispensed via standardized concrete pumps such as the TK 50, which is used by many contractors. CT25 is self-leveling and self-consolidating. It should never be vibrated as it may segregate the internal fibers. All exposed surfaces should be covered with plastic vapor barriers immediately after placing to prevent material dehydration.

Surfaces do not need to be over-prepared, aside from being free of dirt, greases, oils, or other bond-inhibiting agents. All forms should be watertight, of course.

Cor-Tuf UHPC can be used to solve a number of critical problems currently plaguing the construction industry, and provides multiple advantages over traditional concrete. We are more than happy to discuss how it could help you solve the concrete problems you are wrestling with.

The post Problems you can solve with Cor-Tuf Ultra-High-Performance Concrete appeared first on Cor-tuf UHPC.