Shot blasting concrete is one of the most popular systems used to treat concrete surfaces which involves projecting “shot” at a very high pressure (small grains with dimensions between 0.1 and 8mm) to “tear off” the surface layer.

However, shot blasting is not only done on concrete. Let’s find out a little more about this technique.

What is shot blasting?

It consists of applying on a surface a fluid (either water or air) at a very high pressure, to which metallic particles, sand or other materials are added, to achieve an abrasive effect.

This treatment can be carried out for different purposes, depending on what we want to achieve.

Likewise, it can be applied in different ways, which comply to the result we are looking for and the material we are treating. 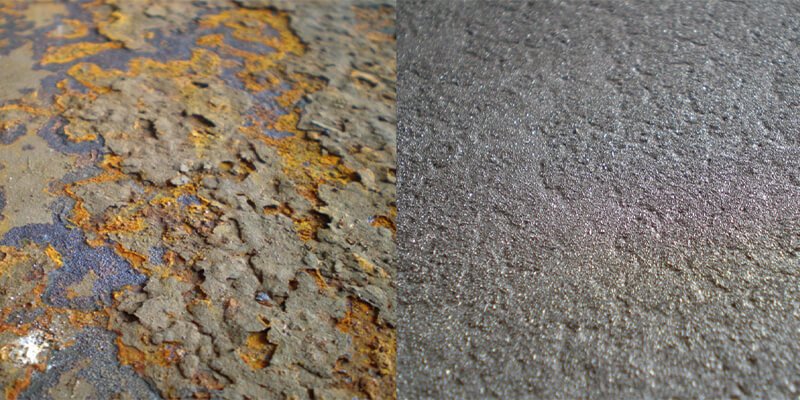 This is the result of shot blasting | Source: brotherslaradiaz.com

Thus, we find, for example, wet abrasive blasting, which uses metal and plastic particles through a stream of hot soapy water.

Shot blasting allows cleaning the surface without damaging it. Therefore, any adhered material that it may have, even if it’s dirt that has been stuck for years, you can be removed.

By doing so, we recover the surface’s original colour, charm and attractiveness that has been had lost throughout the years of continuous use. 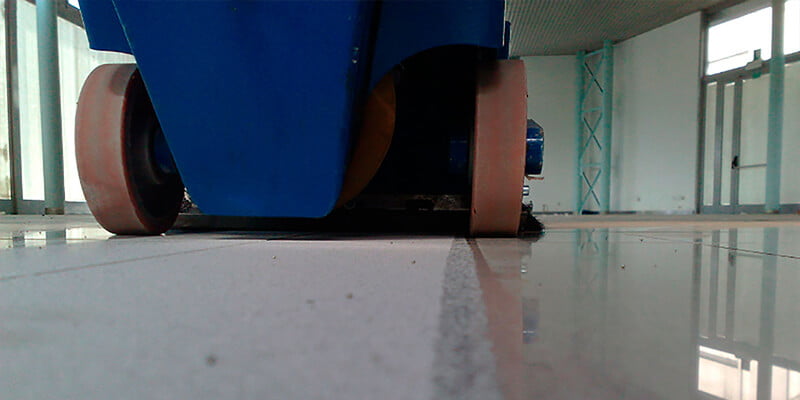 In addition, shot blasting helps increase a floor’s grip and prevent the accumulation of water on its surface.

“It’s a very versatile finish that can be applied on different types of material, such as concrete or stone.”

In this article we are going to focus on shot blasting concrete.

What is shot blasting concrete?

It is an advanced and modern solution that allows preparing and cleaning a concrete floor before applying its coating.

It consists on grinding the bearing layer of concrete, giving it a perfect roughness to apply a coating, such as epoxy resins or micro-cement, or for a smoothing treatment of polished concrete, facilitating its adherence.

It is a method that recycles the abrasive material by collecting it in an airtight container, thus avoiding contamination.

Studies prior to shot blasting concrete

When shot blasting concrete, in order to have satisfactory results, it should be noted that each case has its own peculiarities.

For example, it’s not the same to do it on a highway than on a roundabout. The characteristics of the pavement, the humidity of the environment, the type of shot, the granulometry, the capacity of the vacuum cleaner, the machine, the working width, the speed, etc. All must be analyzed.

Basically, they are all factors that directly influence the choice of type of shot blasting and the strategy. 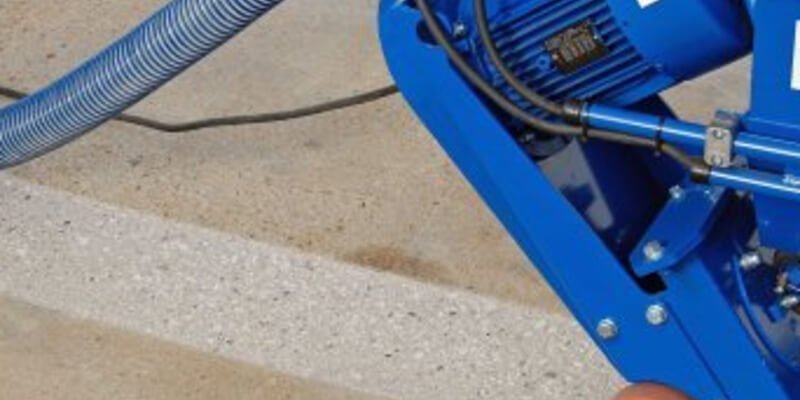 “There are cases in which, to achieve the best results possible, it’s better to clean the surface before blasting.”

What are concrete shot blasting machines?

This type of equipment, by using steel balls or other materials of approximately 2 mm in diameter, hit the concrete flooring at a high pressure and speed in order to eliminate the its surface layer (old coatings, stains, dirt, etc.) and leave it in an optimal condition to then apply a new coating.

However, it’s important to know that they can also be used on different types of floors, such as asphalt, concrete and even steel.

Many concrete shot blasting machines eject the pellets onto the surface at a high speed, fracturing it along with dirt, paint or other contaminating residue. 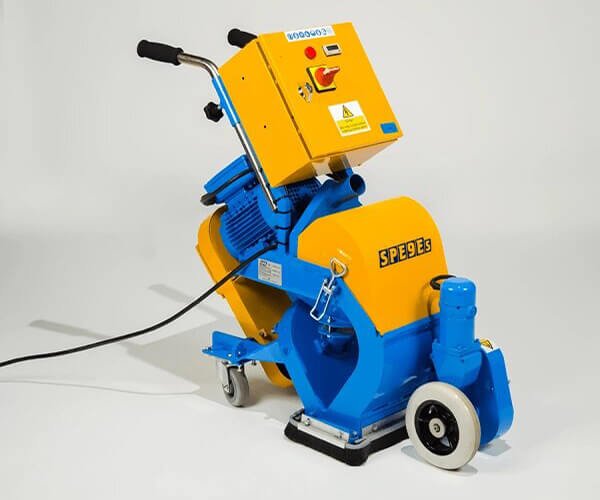 The dirt removal capacity depends on several factors such as the machine’s movement speed, the impact force of the shot, the size and concentration of the shot, among other factors.

“TIP!!!: If the machine moves SLOWLY across the concrete, more debris is removed and the achieved results are better.”

A great benefit from using these machines is that they generate little dust or waste because they have a collector that gathers them. This means they are an excellent option when treating floors in agri-food industries or logistics centers.

These are some of the uses they offer: 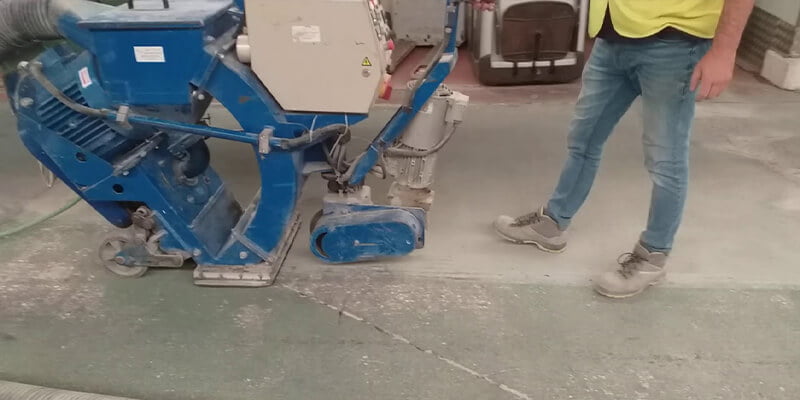 There is a wide variety of concrete shot blasting machines on the market with different working capacities, so it’s up to you to decide which one can best suit your situation.

Generally, they all work in the same way, like the one we show you in the video.

Through a turbine, the shot is thrown onto the surface which is to be treated and then collected by aspiration. The waste created by the process and the shot are absorbed and taken to a partition installed inside the machinery, which is responsible for segregating them by weight difference: the clean shot falls back into the container to be used again until it wears out completely and debris goes directly to the suction system.

Here we show you a video about various types of shot blasting machines and the results they achieve.

Until 1930, blasting was done with compressed air nozzles. It is a method that is unique for specific jobs, such as the preservation of reinforced concrete structures.

As time has passed and technology has advanced, it has now become possible to shot blast in production lines thanks to the appearance of centrifugal turbines, which is much more efficient than compressed air, in addition to achieving a greater uniformity on the floor’s surface.

Some of the advantages and characteristics of shot blasting concrete are the following:

It does not chemically or structurally affect the surface

The concrete shot blasting process does not incorporate or add any material to the flooring, nor does it alter it.

It does not influence the normal rhythm of activity

Performing a shot blasting process doesn’t imply completely stopping the activity which is usually carried out on that flooring. It can be done by zones and organized in such a way that it minimally affects the activity.

Only the shot blasting machine is needed to carry out this process. No auxiliary machinery is required.

It does not affect the flatness of the surface

The thickness of the surface layer of the flooring is not altered.

The waste generated is vacuumed, preventing the output of dust. What’s more, the collected shot can be reused. The vacuum cleaner does not emit any of the residues removed by shot blasting into the atmosphere.

It does not take days to work on that area. The return to normality is immediate. 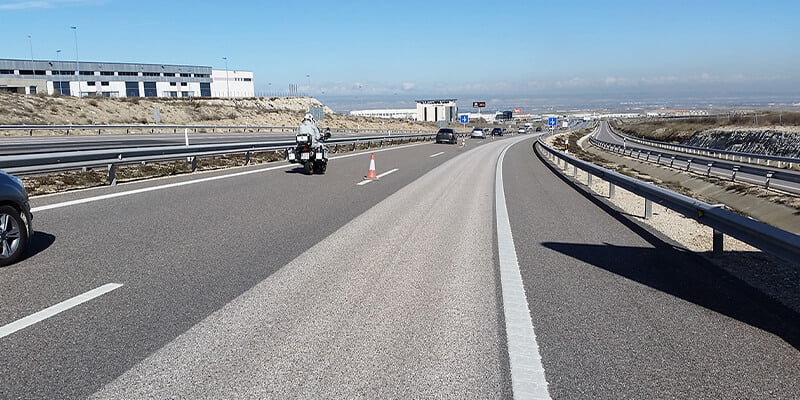 A highway that has been shot blasted | Source: roeco.esPerfect for localized interventions

Due to its price and speed, it is a very profitable alternative for areas with a reduced surface.

In addition to the speed of the procedure, the preparation times are minimal, as well as the work completion.

No need to repaint signage

If we move machinery slowly as we have recommended before, road markings can be avoided.

As we have seen, shot blasting has several functions.

It allows us to clean surfaces with long-lasting and difficult to remove stains, as well as to remove surface layers of old coatings to install new ones.

We have also seen how a process is applicable to different types of materials, from stone, glass or concrete, on which we have focused this article. 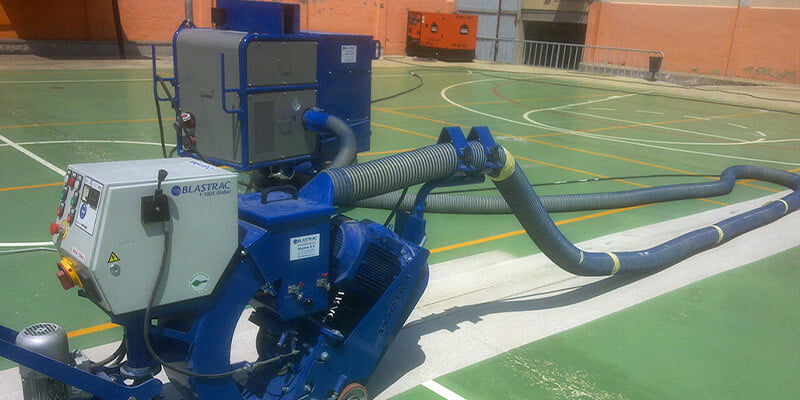 Shot blasting can be done on many types of surfaces, but each case must be studied.

For this reason, machines known as concrete shot blasting machines are used, which emit high pressure pellets that are of approximately 2 mm diameter and carry out that abrasion effect.

It is a procedure that, due to its cost, versatility and ease, is widely implemented in companies that are dedicated to the renovation of pavements and flooring.

These are some of the websites we have consulted for this article: